Actionable Strategies combines the best practices of Human Capital Management with the progressive approaches of high growth organizations.  We have successfully fostered innovation in large multi-nationals, fostered agility in formerly slow-moving departments, created cross-functional teams in siloed organizations, and automated inefficient candidate processes to attract the best talent.  Transplanting proven approaches to accelerate activity and deliver improved results are some of the ways we help our clients truly optimize how they attract, deploy and manage human capital.

Actionable Strategies CEO, Jeffrey Wu, was engaged by CWS Software as the fractional CEO of their Cloud software business.  As part of the digital transformation of marketing and sales, he initiated marketing outreach including publishing content for a variety of channels.  In one such instance, he presented this Webinar on Compensation Management challenges and future considerations. 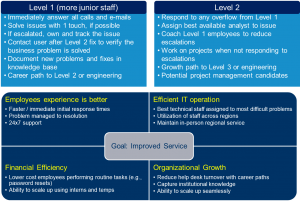 The client develops and manages real estate in major urban markets.  Operations are decentralized while IT is centralized.  As the company grew, the issues caused degradation of service over time.  The work environment for IT became correspondingly more stressful and less rewarding.  Turnover was high and positions could not be filled quickly enough.

To address this two-fold problem, we transformed IT Service Delivery.  Our analysis started with the internal customer base, which had diverse needs and capabilities.  This was consolidated into a plan that addressed the overall needs.

From these goals, we designed an organization and transformation plan to address key HCM issues:

The client develops and manages real estate in major urban markets across the United States.  Headquartered in greater Los Angeles, the company focuses on the commercial and industrial space.  Operations are decentralized in the major markets; each runs independently.  IT is a centralized function that had personnel in some of the larger markets. 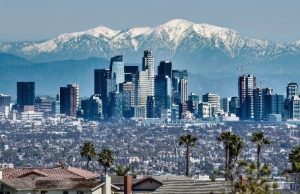 The IT organization had a large internal customer base.

The business was experiencing 2 major problems, despite adequate spending in IT.  Spend was benchmarked against comparable organizations.

We were engaged to transform IT service delivery and ensure that problems would not reappear.

Assessment of IT services revealed a number of issues.  As the company grew, the issues caused degradation of service and the work environment for IT over time.

IT services were never formally defined.  IT staff were each doing their best to respond to requests as they saw fit.  Internal customers only asked for services they thought IT delivered.  This created a gap in requirements vs. actual delivery.

Processes were ad-hoc creating inefficiencies and service breaks.  Users directly requested help from individual IT staff.  When handoffs or collaboration occurred, no clear ownership of problems existed.  Tracking and proactive management were not practiced.

Turnover of the engineering staff was a recurring problem.  Tenure of support staff was also a problem.  Churn in these positions created a constant capacity shortage.

Most importantly, issues with retention prevented IT from proactive service delivery and improvement of the organization.  Over time, the function had become purely reactive and frustrating for the staff.  Internal customers were growing displeased with service degrading and requests not being fulfilled.

Transformation of IT Service delivery involved creating a service desk model.  The service desk would manage all requests for IT service and own resolution of the business problem as determined by the user.  If the technical solution did not solve the business problem, the case was escalated to collaborate on a potential project to create a long-term and more complete solution.

Metrics were created from end-to-end.  Beginning with the users, a baseline for customer satisfaction was created.  This would be the main and perpetual measure of success.  Internal lean measures were used including cycle times, work-in-process backlogs, re-work, and one-touch resolution.  These metrics guided operations. 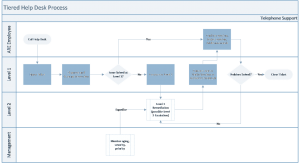 Processes were defined for flowing requests from the service desk to other IT functions.  The process tiered support to achieve a number of results:

The high level process illustrates the clear delineation of responsibilities that did not previously exist.

The well-defined and streamlined processes were beneficial to senior staff, but the model was predicated on Level 1 support resolving the majority of requests. 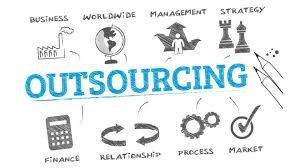 We recommended using an outsourced service provider for Level 1 support.  Quality and services levels were established using the metrics defined earlier in the project.  Maintaining and improving a knowledge base was one of the vendor selection criteria.

The net cost was actually lower due to the operational efficiency of the provider we selected.

In addition, service delivery was expanded.  24×7 support was available as an additional charge which never drove costs higher that the older model.  In addition, “VIP service” was defined for executives and key users.  This special attention resulted in a significant increase of executive support to encourage the changes that were required of users.

Coupled with the proactive projects undertaken by the engineering staff, end user satisfaction jumped dramatically.  Projects including mobile applications were initiated to the delight of users.

Infrastructure reliability and resilience increased as a tangential result.  Engineering staff were no longer involved in lower level support work.  This freed them up to actively improve the infrastructure and core IT capabilities.

Turnover problems were eliminated.  Career pathing fixed issues with spans of control being too broad as staff were promoted into supervisory roles.

The client now has a higher performing IT organization.  Measurements of internal customer satisfaction was the major indicator of success.  Operational metrics demonstrated an improvement in efficiency and shorter cycle times.  Backlogged requests were worked down.  Most importantly, the IT staff were delighted with the new model and enthusiastic about becoming more proactive while experiencing less pressure. 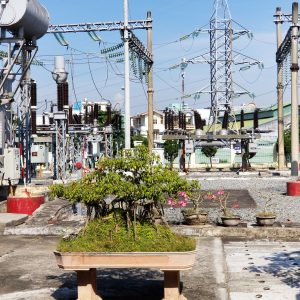 The client is a state-owned enterprise responsible for the distribution of electricity in Vietnam.  The introduction market-oriented reforms includes competition for human capital.  Compensation is now a critical part of recruiting, management and employee retention.  Actionable Strategies was asked to design a measurement system for all of IT and then align a compensation model to it.

An IT Balanced Scorecard was developed that aligned with the business Balanced Scorecard already is use.  A tiered measurement system was designed that tied performance objectives to the strategic IT objectives.  After investing the time in educating IT executives and front-line managers, Actionable Strategies let the now motivated leaders drive implementation.

Alignment of compensation to IT strategy to business strategy required a structured approach.

After communicating the perennial importance of Business-IT Alignment to global leaders, we formulated the key considerations for the client.

The IT Balanced Scorecard provided the vital few measurements to drive IT to deliver business value.  Run-the-business performance was expected to remain stable or increase marginally and no degradation of service would be acceptable. 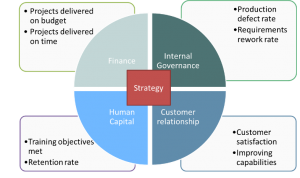 Measurements were tiered.  Each of the measures had a departmental objective to foster ongoing teamwork, and individual measures to drive personal performance.

The client was advised that while measurement systems can be revised, a number of caveats should be remembered.

The IT Measurement System would be built applying the following guidelines.  Actionable Strategies defined overall IT goals which were embraced by executives and leadership.

Client leadership would define specific measures based on this framework.

For details about each of the measures and implementation, please download the full case study. 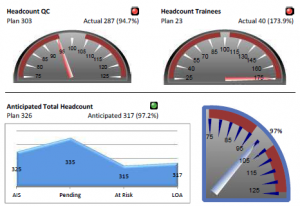 Click here to view the case study about Predictive Analytics for Turnover. The Fortune 500 client provides services using human capital from 20 regions.  They serve over 700,000 clients in 112 countries, generating revenues of $12 billion.

To ensure sufficient staffing was available for key functions, a model was created to predict staffing levels vs. future plans.  This enabled the client to have new hires step right into newly open positions without loss of capacity.

Spreadsheets have unequivocally enabled knowledge workers to quickly and easily use data to solve numerous business problems.  Every organization uses them in day-to-day situations and many rely on spreadsheets as part of critical business processes including compensation management.  While spreadsheets have revolutionized work in many industries, they have also introduced potentially dangerous situations for businesses that rely on the accuracy of the numbers they produce.  This white paper will examine some of the dangers of using spreadsheets in lieu of a flexible system that supports streamlined workflows to manage the critical process of compensation management.

Future of Renewables Critical to Emerging Markets – The Future of Renewables Global Event reinforced the importance of Actionable Strategies’ projects in emerging markets.  1 in 8 people in the world lacks electricity impacting the cold chain to supply vaccines and leading to household air pollution which results in 4.3 million deaths annually.

ESG Returns to Strategic Prominence – As the pandemic is projected to recede next year, ESG is already reemergenging as a key strategic consideration.  Signs include Mandatory Diversity, Increasing Investment, and Corporate Pledges.

Strategic Objectives for Myanmar Smart Grid Strategy – Actionable Strategies has signed a MOU with a consortium in Myanmar for a Smart Grid Strategy and implementation.  The long-term strategy will begin with grid modernization in Yangon, adding more advanced Smart Grid technologies with a foundation of information and communication technologies.  Myanmar has the lowest electrification rate in Southeast Asia, constraining economic growth and impacting social, environmental and developmental improvements.

Strategic Planning During Heightened Uncertainty – The global pandemic has heightened uncertainty which increases the need for an actionable and achievable strategic plan.  Key planning considerations include uncertainty over the shape and timing of the recovery, transformation of many aspects of core business models, political uncertainty and the return of ESG.

Supply Chain Diversity – Reducing risk from overseas supply chains is important.  Lessons can be learned from the financial crisis and diversification of prime brokerage.

Spending Velocity will Curtail Recovery – As money flows back into the economy, the rate of spending will decrease as work-at-home continues and households pay existing bills and replenish savings.  This reduced velocity will dampen the rebound, inhibiting a rapid V-shaped recovery.

Virtual Work – Creating a virtual work environment is a leadership challenge that should be managed.  Being productive at home involves controlling yourself as well as your environment.