Organizations that lack data cannot navigate the modern world.  Once data is synthesized into actionable information it empowers organizations to act decisively and intelligently.  Our experience in validating strategies, providing situational awareness and accumulating knowledge from unstructured data has proven valuable to clients across industries. 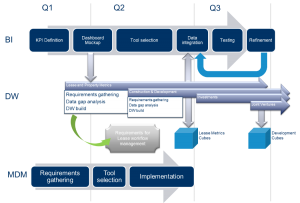 The client is a $1.1B publicly traded REIT that acquires, manages, expands, and develops office and laboratory space properties.  Data analytics were required by all of the stakeholders, particularly investment, construction, finance and accounting, and senior executives.

After successfully delivering a data warehouse and Essbase analytics project, we continued to deliver against the data analytics roadmap that we defined.  Applying Agile techniques from program management through to product development, yielded business results in 6 months.  The roadmap continued to deliver further analytical capabilities with a predictable cadence.

The data analytics program built upon the successful first project.

The business lacked visibility because of the lack of information.  The legacy ERP system provided some raw transactional reporting but this was backward looking and had to be manually manipulated in Excel to produce usable information.  At the root of this problem was the lack of a data foundation and applications to deliver the right information to the right people at the right time.

Rather than attempting a major data warehouse initiative, we applied an agile approach.  We still utilized good project management practices and developed a program charter which obtained buy-in from senior leaders across the enterprise.

The first project in the program delivered analytical capabilities for finance.  As a publicly-traded REIT it was essential that financial reporting be both accurate and timely.

Key elements of the pilot, which became best practices for future projects:

Once the pilot garnered excitement, our mandate to drive the program forward was solidified.  While the

client was concerned about results rather than the Agile techniques used, they were critical to rapid success.

Continuing with the Agile approach, the next steps in the program were defined.  Once again, we applied solid program management practices and actively engaged both stakeholders and detractors to maintain alignment and reduce resistance.

The next detailed part of the roadmap delivered high value analytics that were achievable.  For long running programs, our objective is to establish a steady state that can be brought in-house and managed by the client.

The program was faced with a number of key challenges.  While data modeling was difficult, it was completed in a timely fashion.  The relative immaturity of the organization with respect to data and analytics posed several constraints.

We had to educate the client around data modeling and master data.  They were very receptive and agreed to add a separate project to address their issues with master data.

The presumption by the client that data was clean eventually eroded as rapid prototypes revealed data quality issues.

As a publicly-traded company, the client had many data assets to protect.  Developing an entitlements model was time-consuming but necessary.  The model was propagated back into HR and IT processes.

Unaccustomed to enterprise programs, the client had difficulty reaching consensus.  Being pragmatic, we delivered building blocks such as dashboard components which could then easily be rolled up into enterprise-wide business views.

Applying Agile techniques combined with pragmatic program and project management discipline quickly delivered tangible business results.  This established the foundation for a data analytics program that grew in functionality and footprint to include Oracle Business Intelligence.  Subsequent business projects began delivering value based on a solid and expanding foundation.  Knowledge transfer, documented and automated processes, and extensive collaboration enabled the client to move rapidly up the maturity curve.  This facilitated an eventual transition to in-house teams. 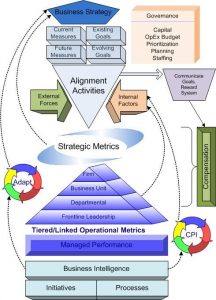 Evolving market conditions in all industries have brought the need for insight into the business into much sharper focus. By applying Lean principles to attaining better insight, organizations achieve high impact results.

Actionable Strategies applies a strategic framework to ensure that the front-line delivery aligns to business objectives.  Simple end user business intelligence tools often rely on incomplete, incongruous or incorrect data.  The focus of enterprise BI is on delivering correct data in a consumable form at different levels of the organization. 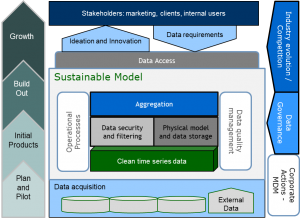 This industry leading company provides processing of HR data and outsourcing on a global basis.  It has amassed the largest independent data sets encompassing just under a million companies and over 30 million people.  Despite having 60 years of history, the company was lagging smaller competitors in the area of analytical capabilities.

Actionable Strategies built the foundational organization, processes and technology models used by the client today to provide products, solutions and advisory services to their customer base.  The initial data science work enabled the client to understand what assets could be delivered to the market and also used internally.

An evolutionary approach enabled the client to move from Plan and Pilot activities to the Growth stage.

A sustainable model was established and built incrementally. 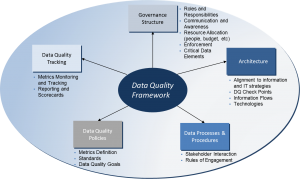 This global real estate firm invests in best-in-class campuses for science and technology in the most desirable urban locations.  Their total market capitalization is $11.1 billion and they operate an asset base of over 25 million square feet with 6 million square feet of new development in the pipeline.

As executive and front-line leadership grew more sophisticated in the needs for analytics, data quality issues arose as more advanced visualizations increased the consumption of data cross the organization.  Quality issued had been previously masked as data tended to remain in operational silos such as ERP, with summarized information used for decision-making.

The client uses an enterprise resource planning platform to house data for every major function of the business.  However, each function produced and consumed data as appropriate for their individual use.  Major functions such as investments, asset management and financial reporting treated information in very different fashions.

As executive and front-line leadership grew more sophisticated in the needs for analytics, data quality issues arose.  These had been previously masked as data tended to remain in operational silos with summarized information used for decision-making.

Actionable Strategies dealt with initial resistance to acknowledging data quality issues.  We have found this to be commonplace as data may be fit-for-purpose but not usable as-is in the enterprise.

Data owners: One foundational activity was to establish data owners who “produce” information for others to consume.  Their upstream position in the information value chain empowers them to maintain data quality while obligating them to produce it in a fashion that conforms to downstream use.  Individual contributors were educated on how their data was consumed and how to execute data quality processes.

Data stewards: Data stewards with subject matter expertise were identified.  They were educated in the relevant value chain, which included both process and data knowledge.  At this particular client, they were empowered to directly affect operational change to maintain data quality on behalf of data owners.

Architecture: An architecture that met immediate and future data quality needs was defined.  This included automation of workflow and data ingestion. 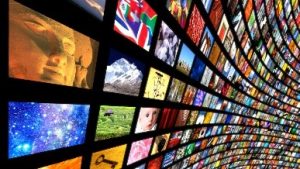 Click here to view the case study of this early stage media company that big data from set-top boxes and out sources to drive media planning. We linked the ads viewed by demographic groups and linked them to eventual purchases.  This allowed media purchases to become highly targeted.

As a result of the successful product launch, the client grew as a leader in the field.  Eventually, it was purchased by a large media player leading to a highly successful and profitable exit for investors. 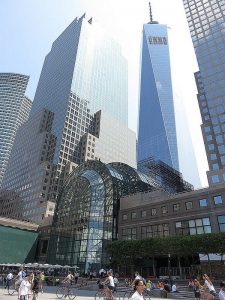 Click here for the case study of a data warehouse and analytics program.  The client is a global real estate services company that operates a portfolio of properties and development projects.  It is fully-integrated, developing and managing premier assets focused on the tenant experience.

The company has $202B in assets and 19,000 employees managing over 600 properties. 30 more projects, comprising 40M square feet, are under development.  The portfolio contains 450M square feet of commercial properties, over 17,000 apartments and 170 retail destinations.

Actionable Strategies was engaged to manage a program to deliver a data warehouse, business intelligence and data governance while improving PMO capabilities. 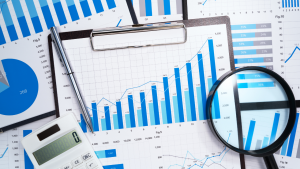 Distant Horizon for Maturity of ESG Reporting – Too many standards and continued uncertainty about ESG Reporting is delaying maturity.

ESG and Transformation – Capital allocation to ESG is increasing but transformations are required in key areas.

ESG Pushback and Controlling Reporting – According to some investors, ESG is nonsense!   Companies must control reporting as it directly affects their valuations.

Reputational Risk and Market Value – A company’s reputation is a precious intangible asset that is directly affected by ESG activity.  It should be managed as a vital asset.

Recovery Underway Despite Hardship Anecdotes – Despite many economic hardships the start of the recovery is well underway.

Aligning ESG to Strategy  – Ensuring strategy aligns to ESG goals is a growing part of our work.  Our power infrastructure project in Myanmar will reduce existing emissions and integrate renewable energy sources in alignment with a number of frameworks.

Future of Renewables Critical to Emerging Markets – The Future of Renewables Global Event reinforced the importance of Actionable Strategies’ projects in emerging markets.  1 in 8 people in the world lacks electricity impacting the cold chain to supply vaccines and leading to household air pollution which results in 4.3 million deaths annually.

ESG Returns to Strategic Prominence – As the pandemic is projected to recede next year, ESG is already reemergenging as a key strategic consideration.  Signs include Mandatory Diversity, Increasing Investment, and Corporate Pledges.

Strategic Objectives for Myanmar Smart Grid Strategy – Actionable Strategies has signed a MOU with a consortium in Myanmar for a Smart Grid Strategy and implementation.  The long-term strategy will begin with grid modernization in Yangon, adding more advanced Smart Grid technologies with a foundation of information and communication technologies.  Myanmar has the lowest electrification rate in Southeast Asia, constraining economic growth and impacting social, environmental and developmental improvements.

Strategic Planning During Heightened Uncertainty – The global pandemic has heightened uncertainty which increases the need for an actionable and achievable strategic plan.  Key planning considerations include uncertainty over the shape and timing of the recovery, transformation of many aspects of core business models, political uncertainty and the return of ESG.

Supply Chain Diversity – Reducing risk from overseas supply chains is important.  Lessons can be learned from the financial crisis and diversification of prime brokerage.